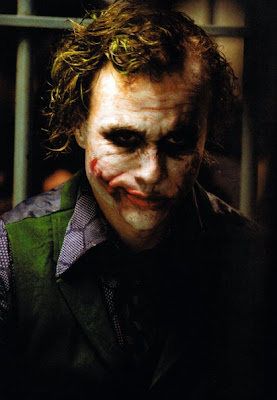 First of all.. i have been waiting for this for 3 LONG years.. & the anticipation actually killing me for this past month when i realise is coming nearer.. Plus with all the spoilers from early screening screaming to me online.. sleeping have been really tough for me personally.. But the anticipation over took my control.. so i did read some spoiler online & watch all the leaked videos.. so i roughly know how the storyflow gonna be.. 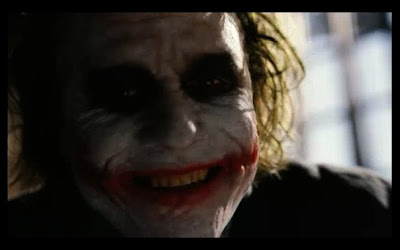 So i know every1 is posting about how good movie turns out.. i guess wif the death of Heath ledger really bring up the hype.. nway i really think thats 1 good performance.. specially for such a difficult role as the Joker.. Thousand thumbs up for my Perth boy.. 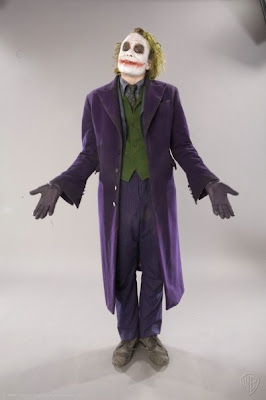 The Joker.. Wat more i can say.. with the pressure of taking up the role from Jack.. really tough shoe to fill.. But Heath did it better then that ill say.. Best renditon of the joker humanly possible.. He look so brutal & psychotic in all the face-off scene.. Really make u think that he is born to the character.. even without any lines.. his body reaction just amazing.. His grungy makeup, the spine-tingling sense of humor, and a laugh filled with such manic glee it makes my skin crawl and my stomach turns.. His performance giv me the real new meaning of Cinematic villains.. Never has a villain so evil seemed so approachable.. n no 1 can top that.. For sure.. 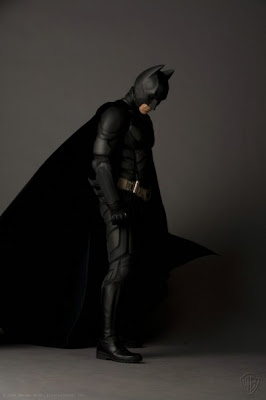 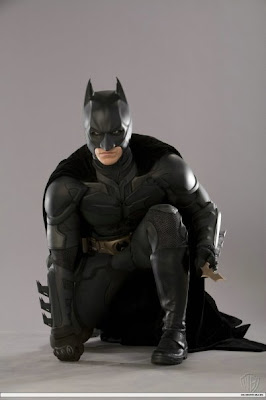 The Dark Knight.. i noe alot of ppl r complaining bout the batman voice.. for me i honestly love it.. he is the dark knight.. The new suit to me.. im not a big fan.. but at least it shut ppl off for joking bout "How batman cant turn his head".. I gotta giv it to Christian Bale for marvels in the duo role of Bruce Wayne/Batman.. specially this time around he finally does some detective work. He creates a device giving him the ability to monitor everyone in Gotham City via a satellite that detects cell phone signals. Plus dun let me start wif the Thumbler & batpod.. Just amazing.. 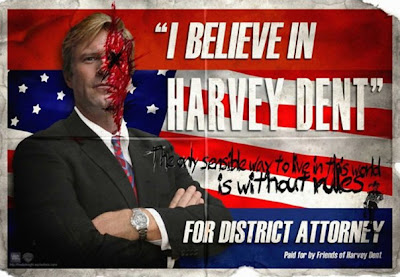 In all the talk of the Dark Knight most people seem to be talking mostly about Bale's Batman and Ledger's Joker. I agree that Ledger's Joker was beyond amazing, it really was iconic but I would like some draw people's attention to Aaron Eckhart's Harvey Dent. I thought the character was incredible with an awesome turn by Eckhart in this film. With all the viral campaign "I believe on Harvey Dent".. we all noe that sooner or later theres gonna present us Harvey Two-Face.. With no official image of Two-Face b4 the movie release.. it makes me wonder crazy on how he gonna look like.. In the Movie i really like how Harvey was central of the story and I thought Two-Face was a perfect character choice for the theme in which this film explored. The inclusion of Two Face reminded me of how Venom was structured in Spiderman 3.. except the Dark Knight showed how to do this properly without screwing up its villain in the process. Plus really like how they show harvey turning his face back & forward.. showing a lil bit of his scarred part.. then finally showing full image wif a thunder backsound.. The scarred face !!! Just AMAZING.. Perfect.. with no comment.. 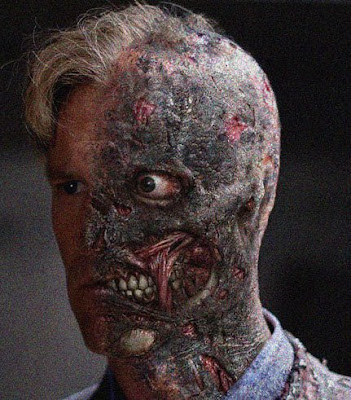 I know that his performance cannot measure up to Ledger because quite frankly Ledger was just too intense for anyone to deal with. But Two-Face is always Batman main Villian.. so theres more of him in the future.. *no spoiler*.. hahaha 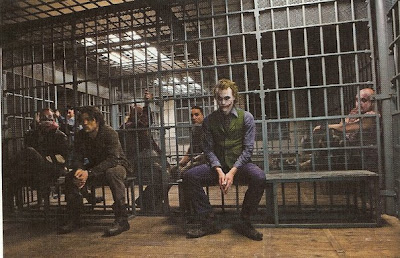 Another strong opinions is Hans Zimmer, i gotta say is a brilliant composer that he created the mechanics of the music throughout the movie.. specially with the plain zzzzzz sound thru-out the all Joker scene.. which lead up to the fianl fight scene..

Average Prediction on the 3rd chapter of Batman.

1. Main villian gotta be Harvey Two-Face.. return to take revenge on the his loss.. & NO his not dead.. note Gordan sayin he doesnt want the public to noe that Harvey is turning to a villian.. where harvey hav done so much good to the city.. so batman hav 2 take the fall & running away..

2. Definately a return on Joker.. Properly start with Joker locked in Arkham Asylum (Psychiatric hospital for criminally insane).. i reckon Joker wont be a big part in the next movie.. Just hope Nolan can find the right replacement.. my money is on Mark Walberg.. i think he can pull it off..

3. A new batmobile.. as u can see the thumbler is been destroyed.. *i cant wait to see this* & hope more other bat vehicle..

4. A new villian.. with alots of predicting on Riddler.. which theres some many hints hidden in this The Dark Knight Movie.. 1st nomination goes to Mr. Coleman Reese (The dude who try to blackmail Freeman).. Original Riddler started with a jealousy of bruce wayne.. then fired by the Wayne enterprise.. then take revenge.. the only doubtfull part is the original Riddler character name is Edward Enigma.. ah mayb Nolan wan2 change the story as wat he did with the 2face story..

5. Another new villian.. my money will be on Peguin.. he is just another great villian to tell.. Just hope they dun bring Robin.. i cant see this new generation batman with a sidekick..

6. The public is turning again batman for all the killing in the Dark Knight.. u can see it gonna b a really dark story line where batman hav2 fight against the future villian & the public..

7. The return of Scarecrow.. i really think that Nolan will re-introduce back Scarecrow.. with a 30sec in this sequal.. Plus joker say "this city deserve a better class of criminal.. Im gonna giv it to them (Scene: Money burning with the mob guys).. plus if he's locked up at Arkham Asylum.. theres where he gonna meet Scarecrow.. 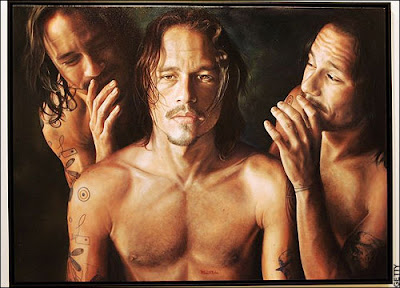 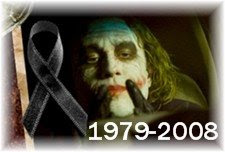 can anyone tell me which is the best counter strike guide ? :)...i found this one :

What do you nigh close to it ?

Sorry for my bad english :s